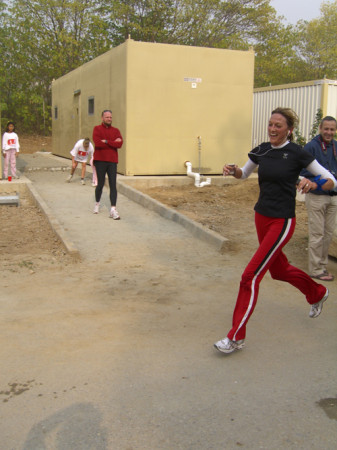 Crossing the finishing line in the hope for a prize

Sunday was another big event for the sporty folks in Islamabad. The Canadian Club in the Diplomatic Enclave had organised a fun race comprising a 3km, 5km and 10km race. A few friends of mine and I took part in the event and this time around it went through and was not cancelled because of security. However, it was quite interesting that when we walked to the start, we were accompanied by a police escort despite the fact that we were inside the secure surroundings of the Enclave, which is protected like a fortress.

It was good to see that all in all about 140 runners were taking part, and 40 of us were running the 10km race. This time I was not the only woman and I guess about 10 of us were competing against the majority of male runners. It was a gorgeous day and the temperatures were perfect for a nice jog. I went along with my running mate Christian, Ale, my friend and core exercise teacher, her husband Manuel and Nicole, a Swiss friend of mine. I felt a bit nervous before the race, as I seem to have gained the title of “the fit woman in Islamabad”. The other day I bumped into a lady in the Afghan bakery – a great bakery that makes delicious German bread – and she looked at me and said: ‘Ah, you are the fit woman on the bicycle’. So, I was worried not to come up to my title and run really slowly (and I am really not a fast runner). 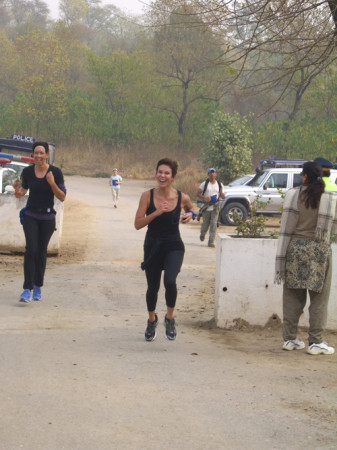 Ale, excited to run towards her third prize, which she never received, closely followed by Nicole

Anyway, about 3km into the race I a guy kept on trying to overtake me and of course, I was not having this! I really pushed my body to its limits but after a while we both decided that this was too exhausting and so we ran next to each other. We had a bit of a chat and I found out that my temporary running mate was Stephen from the UK. When Stephen and I overtook a woman I noticed that there was no other female runner in front of me. I got very excited as I thought that this time I had the chance to win a prize, as it was a dead cert to me that the organisers would have catered for the female competitors in this race.

When I crossed the finishing line the lady with the stopwatch told me that I had finished in 47 minutes and 58 seconds and when I asked her whether I was the first woman she looked at me surprised and said she did not know. However, my friends, who had already completed the race, confirmed that I was indeed the fastest female competitor. But the fact that the lady at the finish was not interested in either my name or my time made me suspect that once again I would be winning the women’s category in a race without getting recognition.

And indeed that was the case. After having hung around the place for a while we went inside for brunch and the award-giving ceremony and after the three winners had been given their prizes the ceremony was over! I have to admit that I was slightly disappointed as I had never won anything in my life and I was very excited to finally receive an award or at least a recognition by my name being mentioned – but none of this happened. My friend Ale, who came third, was equally disappointed.

I guess I will have to launch a campaign for competing women in Pakistan as I seriously think it is quite sad that we do not get the recognition we sometimes deserve. I guess the organisers, who I utterly admire for organising these events and I hope they will continue to do so, are not used to women taking part in these races. However, as more and more female runners enjoy taking on their male counterparts, it would be great to have a women’s category in the future.

I will certainly keep on training and maybe next time I will win a prize!