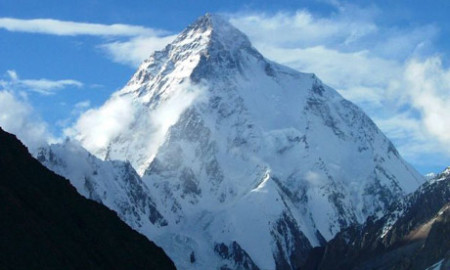 K2 - the second highest mountain in the world (photo: EPA)

Last Friday, another piece of mountaineering history died when Lino Lacedelli passed away in his Italian hometown of Cortina d’Ampezzo. Lacedelli, who died of a heart condition at the age of 83, was one of the first two men to conquer K2, Pakistan’s highest peak and the second highest mountain in the world.

I was surprised to find out about Lacedelli’s death on an international mountaineering website as I had actually expected the Pakistani media to recognise his death with an obituary. However, when I meticulously went through the papers and the various Pakistani news websites, I could not find any news about this famous mountaineer, whose first ascent of K2 did not only trigger national rejoicing but also unprecedented controversy in Italy.

When Lacedelli and his fellow climber, Achille Compagnoni, reached the top of K2 on 31 July 1954, Italy celebrated a national triumph like the British celebrated Sherpa Tenzing Norgay’s and Edmund Hillary’s first ascent of Mount Everest (even though neither of the two were of British origin, however, they were part of a British-led expedition).

But unlike Tenzing’s and Hillary’s expedition that never triggered any dispute other than who actually was the first to set foot on the top, Lacedelli’s and Compagnoni’s ascent of the 8,611-metre-peak sparked a controversy with another climber.

Walter Bonatti, a 24-year old mountaineer, was also part of the expedition. He and Mahdi, a local Hunza porter, were asked to take some spare oxygen to Lacedelli and Compagnoni for their summit push.  However, this undertaking, which did not turn out as planned, caused Mahdi to lose all his fingers and a few toes to frostbite.

When Bonatti and Mahdi reached the high camp, which was further away than the two climbers had expected, the two aspiring summiteers told them to leave the oxygen and descend during the night. At 8,100m, Bonatti and Mahdi had to spend the night in the open and the two barely survived.

Many years later an Italian newspaper accused Bonatti for trying to sabotage the summit attempt by claiming that he had used the oxygen to make sure the summit team would run out and fail to reach the peak.

Bonatti sued for libel and won, however, the true story only came out when, in 2006, Lacedelli published his book K2 – The Price of Conquest, in which he explained that the oxygen did not run out because of Bonatti but because the route was too long.

After having screened the newspapers for news about Lacedelli’s death in vain, I immediately went to Saaed Bookshop, one of the biggest bookshops I have seen outside Europe, to buy a book about that first ascent. But I was even more surprised to find out that the salespeople had never heard of either Compagnoni or Lacedelli and had no books about this expedition on display. I could find mountaineering books by Edmund Hillary and Sherpa Tenzing Norgay but nothing about this amazing achievement that happened here in Pakistan. I suppose that if I had gone to the Pakistani Alpine Club I would have found a different response but amongst the general public, nobody had ever heard of the duo.

If you compare this with Tenzing’s and Hillary’s feat and the popularity and fame the pair, especially Hillary, had achieved over the years this is quite surprising. Of course, Mount Everest is the highest mountain in the world, but K2 is not only the second-highest mountain in the world it is also deemed as the most difficult of the 14 8,000-metre peaks. So why has his death not earned more recognition?

I guess Edmund Hillary had done a lot for the Sherpas in the Everest Region, as he built the first schools there and brought tourism and wealth to the region. I do not know enough about what Lacedelli and Compagnoni, who died in May this year, did for Pakistan, but their feat seems to have attracted a lot less fame and recognition than the first ascent of Mount Everest in 1953.

Leave a Reply to Markus