Normalcy in times of war and suicide bombs

On Sunday once again, at least 10 people died in a suicide bomb attack near the north-western Pakistani city of Peshawar – and, once again, it happened in a busy market place. The Taliban claimed responsibility for the attack and these violent strikes are expected to continue as long as the Pakistani military carries on its operations against the Taliban in South Waziristan. 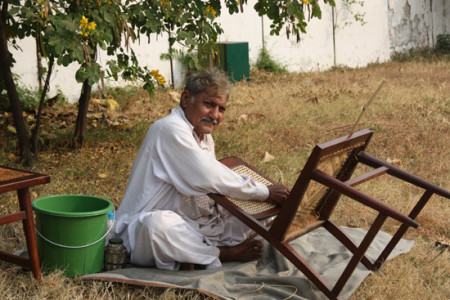 Chairs still need to be fixed in Pakistan.

Times are tough here at the moment, especially for the Pakistani people, who see their beautiful country being destroyed by fighting and suicide bombs, and who worry about their future and the future of their children.

For us ‘internationals’ life is also not easy as the thought of being caught in a suicide bomb attack is with us most of the time. However, I refuse to worry about it too much as it would make my life here miserable and I would probably have to leave to live somewhere else. And even though the thought of a bomb blast crosses my mind when I am in a busy market or in the swimming pool, I am still enjoying the hills, I still go out on my bike and I try and lead as much of a normal life as possible.

And other people do as well. Last week, for example, Valery Roszov, a Russian base jumper, tried to jump off a 29-storey building in Karachi. He did not to finish his feat completely, as strong winds blew his parachute off course and got him stuck on an adjacent five-storey building. But the fact that this man came to Pakistan to, as he said, express his solidarity with Pakistan for fighting militancy, shows that normal – or in this case rather abnormal – things are still possible here.

I have just been out on my bike around Islamabad to see what people were doing on this relatively grey Sunday (this is the first grey day since I arrived here on 18 August). And even though you see a lot of armed security guards and police, people still gather in the markets, mothers still take their children to the playgrounds and young men still play cricket in the fields. 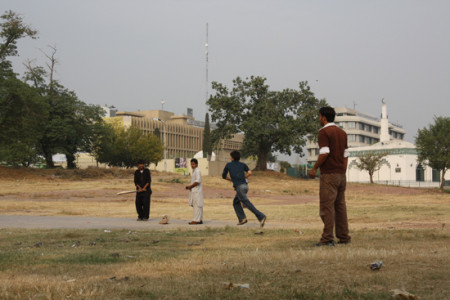 Young men playing cricket in a field near the Parliament.

And the most beautiful thing is that people still smile. When I ride my bike to work or to the swimming pool, the security guards or police officers always greet me with a wave and a smile, and that makes me very happy. I really appreciate their friendliness, which sometimes amazes me considering how much hardship they have to endure, how much worry they have to live with and how much fear some of them must have.

As far as events are concerned, races are still being organised in Islamabad. Of course, there was the triathlon a couple of weeks ago, and in December there will be another 10km run in the Diplomatic Enclave. It is a shame that these events cannot be held elsewhere than in the safe surroundings of the Diplomatic Enclave, however, this little fortress gives the organisers the opportunity to go ahead with such events.

So, for everyone who is worried about me and my life in the Pakistani capital – don’t worry! I try and lead a normal life and with an average of 70km of running per week, it is as normal as it can get – at least for me. I have also met wonderful people, both foreigners and Pakistanis, and I am learning a lot about the situation in this country, which I am very grateful for. And even though I miss my mountains and a my freedom, I am enjoying my time here very much.