Dashain – no fun for Billy goats

I got back to Nepal on Saturday, 26th September and I arrived right in the middle of Dashain, which is the biggest festival in the Himalayan country and I guess it is comparable to our Christmas time. 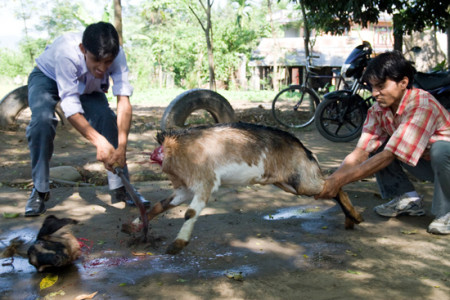 A common scene over Dashain!

The country virtually stops for the duration of the holiday, which is about 10 days, however, the eighth, ninth and tenth days are the most important ones during which most offices, shops and restaurants remain closed – even in the main tourist area of Thamel. Dashain is a celebration of the victory of good over evil and it culminates in the slaughtering of goats on the eighth and ninth days. On the tenth day, women prepare “Dashami,”, a mixture of rice, yogurt and vermillion, which is known as “Tika”. The elders put the red colouring on the foreheads of their younger relatives to bless them with fertility and abundance. Some of the “Tikas” are so big and heavy with rice and other stuff that I sometimes get the feeling its bearer could tip over any minute.

When Richard, Maske and I went for our traditional run to Thoka on Sunday morning, the odour of dead meat had already cut through the air at the crack of dawn. Dashain is certainly not a good time for goats in Nepal and as a vegetarian I feel sorry for the poor little creatures when I see them being led away to face certain death.

Despite the killing that is going on all over the country, it is fabulous to be back and absorb the beautiful colours that are so magnificent here, especially after the monsoon. The run to Thoka, which I did in shorts and t-shirt and felt like a real treat after having run in a Kurtha for the past 7 weeks, was more stunning than I remember it. The rice fields are currently so green it nearly hurt my eyes and the air is so crisp and clean that we were even able to see the surrounding hills quite clearly The temperatures in Kathmandu are also a lot gentler than in Islamabad and even though it is raining as I am writing this, the monsoon seems to have come to an end.

Of course, the time in Nepal is not a holiday for me as I started working for Miss Hawley immediately after I had landed in Kathmandu. She had prepared an extensive ‘To-Do-List” for me, which will certainly keep me off the streets – or rather on the streets as most of my work involves riding my bicycle around Kathmandu, finding and chasing mountaineering expeditions.

I have already met a few expeditions coming back from various mountains in Nepal and Tibet, and one of the highlights was meeting Ueli Steck. Ueli is an amazing Swiss mountaineer, who set the world record on the North Face of the Eiger by climbing that intimidating and difficult wall in 2hours and 47minutes. He had just come back from Makalu, where he was intending to conquer the 8,462m-high mountain via its West Pillar in alpine style – something that had not been done before. Due to the huge amounts of snow that left him up to his armpits to break trail, Ueli abandoned his attempt on the pillar at 7,200m. He descended back to base camp, where two of his mates attempted to climb the 5th highest mountain in the world via its normal route, the Northwest ridge. He reached the summit on 24 September 2009.

Meeting people like Ueli is one of the main reasons why I enjoy working for Miss Hawley so much. Through this job I have met amazing – and of course, crazy – people, who live for the mountains, are interesting to talk to and fun to meet again and again on their quest to conquer yet another peak.