Warning: Declaration of wp_bootstrap_navwalker::start_lvl(&$output, $depth) should be compatible with Walker_Nav_Menu::start_lvl(&$output, $depth = 0, $args = NULL) in /home/customer/www/billibierling.com/public_html/wp-content/themes/billi-bootstrap/wp_bootstrap_navwalker.php on line 22
 Billi Bierling – Journalist and Climber | The Life of Brian

The Life of Brian 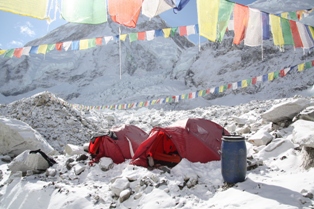 Ellens and my tents in the snow this morning

Finally, the snow showers have died down and we have enjoyed quite a warm afternoon. People are doing their laundry, catching up on emails and watching Monty Python’s ‘The Life of Brian’ in the White Pod. Once again this whole expedition seems surreal and I still cannot believe that we are actually at the foot of Mount Everest.

It seems that we are losing one more of our team members as he has been having problems acclimatising to the high altitude. Russell actually gave him another chance to reach Camp 2 a few days ago, however, he decided that he is just not strong enough at altitude. It is a shame as climbing Mount Everest seemed to be very important to him (well, like to all of us I suppose) and he is supposedly extremely strong at sea level. However, in my short career as an expedition leader in the Himalaya, this is not the first time that I see top athletes, who perform well are strong at sea level, not perform well at altitude. A further fact is that they find it difficult to mentally deal with their lack of strength as all of a sudden they cannot perform as well as back home. I have had marathon runners on same expeditions as couch potatoes, and on many occasions the couch potatoes did better at climbing than the top athletes.

Other than that there is not a lot happening at base camp. Most of the people from other expeditions, who descended to lower altitudes with more oxygen over the past week, have now come back to this temporary city to join the waiting game. On Tuesday morning, I heard a helicopter evacuating a couple of climbers due to health problems, and on Monday the sad news reached us that a Sherpa had died of alcohol poisoning and another Sherpa was having the same problem. The sick Sherpa was treated at the health post at base camp and even though a helicopter evacuated the two western climbers on Tuesday, it did not come back to pick up the sick Sherpa, which was very sad. His condition was pretty serious and even though people had thought about carrying him down to Kunde hospital, the journey would have probably been too much for him. So, this morning I was happy when I woke up to the sound of a helicopter, which had picked up the sick Sherpa and flew him to Kathmandu for further treatment. Let’s hope he will be ok.

Our base camp, which lies a little bit further down the hill, has been quite docile in the past few days. As I am looking around the ‘White Pod’, half of the people here are watching ‘The Life of Brian’ (isn’t that weird) and the other half are asleep. I have no idea how my fellow climbers cope with being stationary all the time as just spending the day here yesterday nearly drove me around the bend. Walking to Gorak Shep this morning felt very good and it made me realise how much quicker I have become compared with other trekkers. I hope that ‘flying feeling’ will continue once I will be dashing up the hill.

Even though the snow showers have stopped the weather has not improved that much and by the looks of it we will still be here for another few days before the first summit pushes will happen. I don’t know when Russell will give us the green light to go up but I will definitely inform you once we know. For the time being, there will be more books to read, more games of scrabble to play and more dispatches to write – and hopefully more walks down to my favourite place – Gorak Shep!

Leave a Reply to Jean-Pierre Gamboa