Warning: Declaration of wp_bootstrap_navwalker::start_lvl(&$output, $depth) should be compatible with Walker_Nav_Menu::start_lvl(&$output, $depth = 0, $args = NULL) in /home/customer/www/billibierling.com/public_html/wp-content/themes/billi-bootstrap/wp_bootstrap_navwalker.php on line 22
 Billi Bierling – Journalist and Climber | A Russian celebration 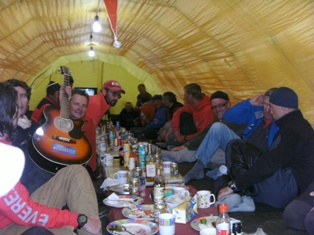 It may sound weird for a German to be invited to the celebrations for the Russian Liberation Day at Everest Base Camp, however, that is what happened to me a few nights ago. Alex Abramov is the owner of ‘7 Summits Club’ and I have known him for a few years now. Alex is a great guy and he always invites me to his Russian dinners or celebrations as a special guest and makes me drink lots of Vodka. I met him in Gorak Shep a couple of days ago – whilst I was doing ‘internetverk’ and he told me that he had wireless internet in his camp and that I was more than welcome to use it. Wow – wireless internet at Everest Base Camp – I think I was actually naïve enough to believe that this was still impossible, but of course it is not. And of course, I took up Alex on his irresistible offer and wandered up to his camp, which towers at the very top of Everest Base Camp. What he did not tell me, however, was that they were also celebrating Russian Liberation Day, and instead of being greeted with a cup of tea at 10 in the morning Alex greeted me with a glass of white wine! Happy Russian Liberation Day!

After I had spent most of the day dealing with my hundreds of emails and surfing the web on Alex’s wireless, I was called over to the mess tent, where there was lots of Vodka, cheese, sausages and lots of other international guests from other camps. Being German, of course, I have no idea how big a celebration the 9th of May is in Russia, however, it seemed a very big deal at Everest Base Camp. Lots of speeches, emotions and songs (even Karaoke) moved into the Russian mess tent that evening and it was actually nice to see that even though some of us were still fighting more than 60 years ago we were all there for the same goal – to reach the summit of Mount Everest. For me personally, it was very special to be invited to such an occasion and after a lot of tooing and frooing, I did a little speech to thank my host for having me there as it did feel very special to me.

Whilst we were sitting on the floor having vodka, baileys, whiskey and all sorts of other alcoholic beverages, Alex switched on the television and proudly introduced his Karaoke DVD to us. The next thing we knew was about ten Russians singing the Beatles’ ‘Yesterday’ completely out of tune and Boris, a 73-year-old gnarly looking Russian rushing around with his camera in order to capture all these hot Karaoke moments.

However, the evening did not last long for me as after having had wine in the morning, vodka in the afternoon and baileys in the evening, I would have had trouble to get back to the Himex camp on my own. So I tagged on to Russell and the rest of our guides and we were back at our BC as early as 8pm – just in time to grab a hot water bottle and a deck chair in the White Pod and watch a movie.

Other than that there is not that much news from base camp today. Most of the teams are off the mountains, and winds as high as 90kmh are expected for high up for tomorrow afternoon. It is currently snowing outside and even though I am sitting in the comforts of the White Pod it seems very cold. As the weather forecast has not changed, we will still have to wait for another week before we can even think about moving up the mountain and I hope that it will not be a lot longer.

I am still feeling strong but sitting around most of the day seems weird for me as I am used to exercise every single day, however, I know that just sitting and resting will make me stronger. We have had snow in the past few days and our base camp has been more or less stationary. I had a very lazy day yesterday (when I wrote this dispatch), however, Ellen and I braved the snow this morning and walked down to Gorak Shep, and I am so glad we did. There were no people on the trail and it was a bit of an adventure as we had to work hard to find the path.

So, I do apologise that I had not updated my site for a while but even though the internet is more or less ubiquitous at base camp, sometimes I do not have electricity to write my dispatch.

I would also like to thank everyone again for the lovely messages and I want to say a special hello to the fathers of Adrian and Megan, who told their children that they really liked my site! Thanks for this – it means a lot to me!

Leave a Reply to Rosemary Lynch