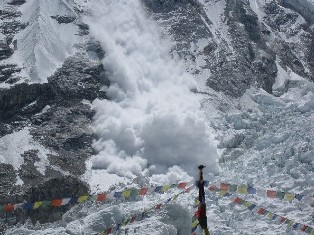 This Thursday was a sad day for the teams at Everest Base Camp and the Sherpa community as a huge avalanche hit the Khumbu icefall and killed Lakpa Nuru Sherpa from Thame. The serac, which had been towering above the Khumbu icefall and had been waiting to come down for quite some time, hit a climbing party at around 10am on Thursday. According to estimates, around 20 people were in the icefall at that time, however, Asian Trekking’s team was right in the falling line of the avalanche. Apart from Lakpa Nuru Sherpa, Austrian mountain guide Walter Laserer and one of his clients were hit by the debris and were thrown into a crevasse. “It is always hard to judge but I guess I was stuck in the crevasse for about one hour,” Laserer said. His client, who fell on top of him, was pulled out by a few Sherpas pretty quickly, however, Laserer’s rescue turned out to be more complicated as he was “melted” into the crevasse. Thankfully, Pasang Sherpa, the Sirdar of the Indian Army Expedition, had a rope, which was used to pull him out of the crevasse. “Before they were able to pull me out they had to cut me out of my rucksack as it was wedged between me and the ice,” he said. According to Thomas Arnold, one of Laserer’s clients, the rescue took about one hour and by the time the victim was freed he had lost consciousness. “I was a little bit further up the mountain looking for Lakpa Nuru Sherpa when I saw Pasang Sherpa carrying the unconscious Laserer down the mountain. It was very impressive,” Arnold said. Apparently some Sherpas took turns in carrying the injured, however, two thirds down the icefall Laserer regained consciousness and started to walk by himself. “When I came to, I thought it was ridiculous to be carried and I managed to walk back to base camp myself.” Laserer seems to have been extremely lucky as he “only” suffers from bruises and some cuts in his face and on his body. “I did not even go to the hospital tent as I have a doctor on my team. All I have to do now is wait for the weather window and go for the summit push,” an unintimidated Laserer said.

Whilst I was talking to Laserer, the leader of the “Eco Everest Expedition”, Dawa Stephen Sherpa, came out of the icefall, where he and a bunch of other Sherpas had been looking for Lakpa Nuru’s body. “There was no trace of Lakpa Nuru’s body but wecannot look for him any longer – it is too dangerous,” he said. They called off the search due to the danger of a further serac fall, however, according to Dawa Stephen most of the other Sherpas are very keen on staying there to continue the search for their friend. The impact with which Lakpa Nuru was hit must have been incredibly hard as the search team found one of Lakpa Nuru’s high altitude boots shortly after the avalanche hit.

The rescue mission seems to be over for now and many of the Sherpas are heading down the hill to the Tengboche Monastery, where a Puja (Buddhist ceremony) is being organised in Lakpa Nuru’s honour. Russell has also asked us for a donation for the family of the deceased – he was married with three children – as it is always hard for the wives to fend for their families once they have lost their husbands in the mountains.

In the meantime, many other Everest aspirants are also wandering down to lower altitudes in order to recover, enjoy thicker air and eat lots to do well on their summit pushes. However, it could be that this recent incident has made some mountaineers rethink their feat to climb Mount Everest, and we might see more people pull out of their expeditions and go home to the safety of their homes and families in the next few days. So far Himex has lost four of its team members due to the fact that they could not bear the thought of crossing the icefall another time. However, since yesterday’s accident none of our members has expressed any wishes that they would like to leave the expedition. As I said before, the Khumbu icefall bears its dangers and even though hundreds of people have been through it since the start of this season, it is never certain when the next serac could come down. I guess that most people here are willing to take the risk in the hope that they will get through quickly enough not to be hit by a serac.

You might ask yourselves now how I am feeling about it and to be honest with you, I am asking myself the same thing. Well, I haven’t even thought about giving up my feat to climb the highest mountain in the world for one minute, and for this reason I have to believe that I will be lucky and quick enough to cross the icefall without incident. Of course, I am aware of the dangers and I am not looking forward to entering the myriad of ice pinnacles again, however, my mission is to reach the top of the world and that is what I am here for.

On a different note, it seems that impatience has set in among some of the climbers. According to the latest weather forecast, the winds will only slow down around 20th May, which is almost two weeks away. I have always wondered how people prepare themselves mentally for such an undertaking but I think this is almost impossible. The physical training is easy but nobody really knows how much mental strength such an expedition demands – and this is not for the climbing but for the waiting and sitting around at base camp. 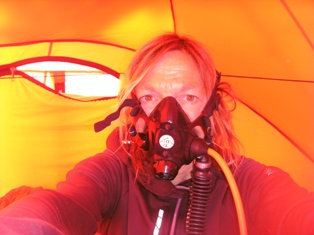 This afternoon Russell brought us a step further towards the summit by introducing the oxygen system to us. It all seems quite complex and I wonder how many things we have to deal with on our summit day, when we start from the South Col at 8,000m in the middle of the night – oxygen mask, oxygen bottles, oxygen flow rate, harness, crampons, gloves, mittens, etc. etc. I hope that I will be lucid enough to remember all the essentials for the summit, however, I will also have to remember the picture of my family, the ‘Sam’s Bar’ sign, the prayer flags for little Sid and the flag for AGFA, my main sponsor.

Ok, I had better go and play with my oxygen mask and write a list of all the things I have to take to the summit, and I hope that my pack will not be too heavy for me to reach my goal in the end.