Warning: Declaration of wp_bootstrap_navwalker::start_lvl(&$output, $depth) should be compatible with Walker_Nav_Menu::start_lvl(&$output, $depth = 0, $args = NULL) in /home/customer/www/billibierling.com/public_html/wp-content/themes/billi-bootstrap/wp_bootstrap_navwalker.php on line 22
 Billi Bierling – Journalist and Climber | “Knickers in a Twist”

“Knickers in a Twist” 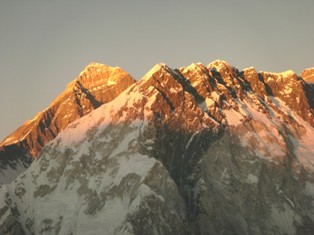 Once again, Team Didi (that is Ellen and I) together with Lance from the United States were the first to arrive at the summit of Lobuje Peak on Friday, 24th April. Despite the doubts many of our team had about going back to the 6,119m peak, it was actually a good idea as a lot of our members just needed that extra bit of experience in using crampons and moving up a mountain quickly. This time we started from our Lobuje base camp at 5,100m, which was a much longer day than our previous expedition. The mountain had changed quite a bit in the past five days and the places where we were still trudging through ice last week were now dry and rocky. It was good practice for everyone as a lot of people found it very difficult to trust their crampons on rock.

We were split into three teams (the Lions, Tigers and Leopards) and the first team summited Lobuje on Thursday morning. Our Sherpas had pitched seven tents on top of the mountain and I was very impressed by how smoothly they had flattened the platforms on this steep site. The top of Lobuje is a bit higher than Camp I on Mount Everest and it certainly offers better views than from the bowl where Camp I lies. We saw an amazing sunset over Everest, Makalu, Baruntse and one of my favourite mountains, Cho Polu.

When Ellen and I entered our tent, which was equipped with two sleeping bags and a cooking kit, we noticed an odd smell. However, we did not ponder over it as we knew that this tent had been occupied by two blokes the previous night. After having made ourselves comfortable and brewed a cup of tea, Ellen all of a sudden cried out and screamed: “Now I know where the odour comes from!” and she picked up a pair of men’s underpants that were inside her sleeping bag! Both of us were in stitches but before I threw them out of the tent I looked at the brand and size of the underpants in order to find the culprit on our return to base camp. I then got on the radio to Russell to find out who arrived at camp without underpants, however, he told me that nobody of the Lion Team had arrived yet. He told me laughingly to bring them down so we could do a “Cinderella Test” at base camp the next day. When I arrived back at our base camp on Saturday afternoon, I quickly impaled the knickers on my walking pole outside my tent, however, none of the boys has yet claimed ownership of the black pair of large underpants that were ‘made in China’. The scarier thought is that these underpants are actually from a previous expedition and have been living inside this sleeping bag for more than one year.

Today, the rest of our team will come back down from Lobuje Peak and we should all be reunited at our base camp to hedge a plan for the next few days. I guess that we will rest here for another couple of days, and then head through the icefall to either Camp I or Camp II, depending on fitness. The weather is still unseasonably warm, however, today was the first day that we woke up to a cloudy sky. I went up to the “real” base camp this morning and chatted to some of the expedition leaders there. I found out that most teams have already been as high as Camp II. However, the site that lies at an altitude of 6,400m was swept away by a storm this morning and some teams have actually lost some tents up there. According to one of our team members, who was at CII for three days, our tents did not get flattened but most people were forced to come back down to base camp today. According to the weather forecast, this is only a temporary low pressure and the winds should die down this afternoon.

I am still feeling good and energetic, and I am currently sitting in our plush “Whitepod” where two of our team members are playing Scaleextric! Yes, you have read correctly – someone brought a Scaleextric set (for my German friends, this is a “Carrera Autorennbahn”) up to base camp and our team is now not only enjoying watching DVDs in the Whitepod but they are also playing Scaleextric!

Let’s see what will arrive next at our base camp! I shall certainly keep you posted!

..and before I forget – thanks to all of you for your encouraging and lovely comments. You have no idea how much they mean to me. They even get me running down to Gorak Shep, which is about one-hour walk away, just to read them. I am sorry I cannot reply individually but communication is not that easy on the foot of Mount Everest! Thank you so much again.

Leave a Reply to Baba