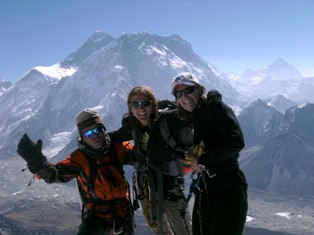 Ellen, one of our Japanese members and I on top of Lobuje

The other evening, when most of our team were either at Lobuje base or high camp, a few of us were sitting in the “white pod” talking about life behind the scenes. It struck me then that even though we are inundated with programmes about Everest, very little is actually known about life behind the scenes. Due to the fact that the clients’ climbing activities seem to be more appealing to the viewers than what the Sherpa staff actually do to make such an expedition run smoothly, these scenes often get deleted by the editors. This conversation gave me an incentive to provide you with an insight into how many people it actually takes to make such an expedition work.

Altogether, there are about 60 people living in our base camp only, and if you think about the logistics, food, toilet use, etc. etc. it is just mind boggling how many hands have to work together to make it run. First of all (and this might not be the most pleasant topic to talk about but extremely interesting) there is a lot of human waste to deal with. But where does it all go? We have two toilet tents for the clients and one toilet tent for the staff, which are both equipped with a barrel that is fitted with a toilet seat. The barrel gets emptied about every four days and the so-called “toilet porter” takes the barrel down to Gorak Shep, where its contents get dumped into a huge waste fill. I asked Russell whether it was not below the porters’ dignity to carry human waste but he told me that they are usually quite proud of their work as it is a very essential job to be had.

The other important people are our six kitchen staff, who work more than 12 hours per day. They get up at 5am and the first thing they do is boil water in huge receptacles to prepare our bed tea. Yes, you have read correctly: bed tea! Lakpa, Kaila and Chakra, three of our kitchen staff, go around all the tents at 7 in the morning to provide us with a hot towel and bed tea. What a way to wake up and I look forward to opening my tent door to them every morning as their smiles is invaluable. The enthusiasm and happiness the Sherpas go about their work has always amazed me. It does not seem to bother them that they have to leave the warmth of their sleeping bag at such an early hour every morning in order to provide their clients with these luxuries – they actually seem proud to be doing it. I have just spoken to Tashi, the second lead chef after Lapchu, who has worked for Russell since 2003, and he absolutely loves working for Himex. “I work for four months every year and Russell has become my “godfather”, he told me. “Russell looks after us very well and he treats us better than many other expedition leaders treat their staff and I am very lucky to be working for him.” Even though the expedition started at the end of March for most clients, work for the kitchen staff commences at the beginning of March. Tashi told me that after they had done all their shopping, they spent nearly one month packing the four tons of food, which was then helicoptered to the Khumbu and put on the back of yaks or porters to be carried up to the high altitude of base camp of 5,300m.

As I am writing this from the luxury and heat of the “white pod” I am looking outside and see the Sherpas work hard building a wall around one of the tents. It almost leaves me with a feeling of guilt seeing them work so hard but I know that if I went outside to offer my help they would refuse and probably feel offended. So, I will just stay in here and keep on writing my diary sitting in one of the comfortable deck chairs.

As far as the expedition is concerned things are going well. Most of our people summitted Lobuje Peak (6,119m) in the past three days, however, it seemed to have been a wake-up call for some of our expedition members. As I said yesterday, some of our members found climbing at high altitude very hard and some of them had problems jumping over a crevasse that was near the summit. However, we had the most ideal conditions and I think it was the most perfect day I have had in my ten years of Himalayan climbing. I did not even get cold hands when I put on my harness and my gaiters at 5am, which has never happened to me before. I had a very good day and I managed to summit Lobuje Peak in about 3.20hrs, just behind our two-times Everest summiteer, Ellen, who is extremely strong and a very accomplished mountaineer. Unfortunately, I did not notice that the mountaineering boots I had bought about three years ago and had never worn before were too small (yes, I did a very female thing and pretended that my shoe size is smaller than it actually is). So, when I got back down to our Lobuje Camp I noticed that both my big toes were very blue and very painful. However, I still managed to walk all the way back to Everest base camp the same day as I was keen to watch the cricket game at Gorak Shep on my way up. Unfortunately, the team was only training and due to the snail’s pace I walked to Gorak Shep I did not even make the training session. However, I later found out that our team went down to the “cricket ground” to challenge the cricket team by telling them that we had been planning a match at the Western Cwm, which would have messed up their record of playing the highest match in the world. The news was first received with a bit of skepticism but once the team found out that the challenge was a joke they showed enthusiasm and Russell was even interviewed by the British broadcaster ITN. Both the “Hillary” and “Tenzing” teams even signed the cricket bat, which we had bought back in Kathmandu. The actual game is taking place as I am writing this and even though I was keen to walk down and have a look, I decided against it as I prefer to bask in the sunshine and rest today.

The unusual warm weather seems to have become a bit of a problem for our climb. A couple of days ago some of the upper part of the Khumbu icefall collapsed and fortunately nobody was hurt, however, last night another part of the icefall came down and our 28 Sherpas, who were supposed to go to Camp 1, had to return to camp as they could not get through. Subsequently, the icefall doctors went back into the glacier to fix the damage, however, we are not sure when it will be open again. So, my team members are currently sitting in the luxury of our camp reading, writing, chatting, washing clothes and so on, but even though the atmosphere seems good, I can slowly sense impatience creeping into our camp. People cannot wait to get their feet on the mountain and finally climb to Camp 1. I think it is interesting that Everest aspirants are very good at preparing themselves physically for the mountain, however, very few people are actually ready for the psychological challenge Chomolungma poses. We spend a lot of time sitting around and waiting, and for the husbands, wives, mothers and fathers on our expedition, this is a very tough time as most of them miss their families and find it difficult to keep their focus on the mountain. But let’s see – we are hoping for the icefall to open again in the next few days and we will then hopefully be on our way to Camp 1.