Off to the land of the Sherpas – but who exactly are they? 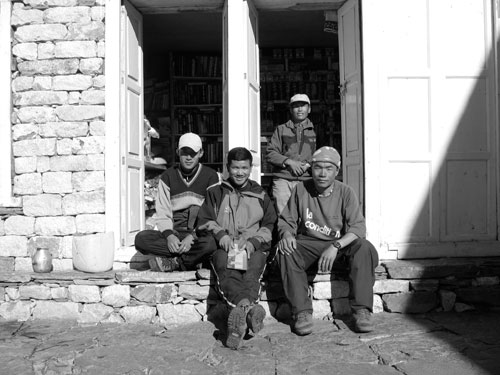 A bunch of Sherpas resting in Gokyo in the Everest region

I have just found out that flights to Lukla have resumed and I can actually hear the planes as I am writing this. This is good news, as the trekkers and mountaineers, who are eager to get out, are finally making it to the Khumbu, or rather to the land of the Sherpas. Now, there is a word that repeatedly causes confusion and after having had an interesting discussion with some Sherpas, I feel inspired to write about these amazing people, who often get forgotten when we talk about climbing Mount Everest.

One of my interviews was with an Irishman, who is going to Everest with three climbing Sherpas, one of whom is not a Sherpa. Ah – already confused? Even though Tshering Bhote is referred to as a climbing Sherpa, he is not of the ethnic group of the Sherpas. He comes from the Bhote people, who live in the foothills of the Himalaya and are related to the Tibetans, just like the Sherpas.

One of the Irishman’s other climbing partners is Lakpa Sherpa, who sometimes gets upset when trekkers refer to their porters as ‘Sherpas’. “Foreigners often don’t know that we are actually an ethnic group and not a job description,” he said. I could not agree more and in order to eliminate the misperception of the ethnic group of the Sherpas, I will try and explain it a bit better.

Porters are often called Sherpas, however, most porters, especially the ones working in the lowlands, do not come from the ethnic group of the Sherpas. In order to understand the complexity of ethnicity in Nepal, you need to know that there are 101 different ethnic groups in the Himalayan country, and you are more likely to employ a Gurung or a Tamang as a porter than a Sherpa.

Ghombu Sherpa from Beding in the Rolwaling valley, who has climbed Everest 13 times, started his career as a porter but got quickly promoted to the cooking team, first as a kitchen boy and then as a chef. “I learnt very fast and I am now an experienced climbing Sherpa,” he said. Once a Sherpa has reached the status of a cook it often happens that the leader of an expedition decides to take him to the summit. This is often an amazing opportunity for the Sherpas, as it puts them into a different bracket for future expeditions. This is also how Tshering Bhote literally climbed up the ladder. “I did not mind being called a climbing Sherpa, however, I have now moved on to be a qualified guide,” he said.

According to the online encyclopaedia Wikipedia, the last census recorded that there are 154,622 Sherpas in Nepal, most of which live in the Everest region. The word “Sherpa” comes from Tibetan and means “eastern people” as they migrated from eastern Tibet and settled in the Khumbu more than 300 years ago. Sherpas are traditionally known to be strong high altitude climbers, however, it sometimes seems that they get forgotten when we talk about expeditions to Mount Everest. Every year, the so-called “ice fall doctors” take on one of the most dangerous jobs on the Nepal side of the mountain, which is fixing the treacherous Khumbu Icefall with ropes, ladders and what else is needed for the mountaineers to cross the huge crevasses that make their way through the glacier. Without these hard-working guys the icefall, which is the gateway to the climb, could not be crossed.

So, this is just a short note to remind us that without the Sherpas Mount Everest would be a very different mountain and not many people would be able to conquer it. And even though most of us are aware of the strength and importance of these mountain people, when it comes down to “western” achievements, they often get forgotten!