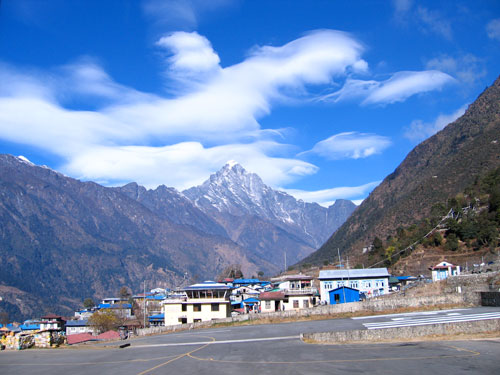 Lukla airport in clear weather with lenticular clouds hovering above it

I have had a few manic days interviewing expeditions for the Himalayan Database, however, today is the first day when I actually have time to update my website. I have met around 20 teams in the past two days and most of them are headed for Everest. As it turns out, I probably could have taken more time finding these teams as most of them are still in Kathmandu – even though they were supposed to have left for the Everest region already. Apparently, thick clouds have descended on the airstrip in Lukla (the gateway for most Everest expeditions) and planes have not been able to land. There were no flights at all on Thursday and Friday, and according to an expedition leader I have just spoken to, only one plane landed in the Khumbu this morning and three had to turn back due to bad weather up there. Expedition members and trekking agencies are starting to get impatient, and tons of cargo is waiting to be flown up and put onto yaks that will carry it to Everest Base Camp.

As the flights to Lukla are not operated on radar, the pilots have to have a clear view of the airstrip to be able to land. This is not a new phenomenon and it frequently happens that the airstrip is covered in clouds by mid morning and planes are unable to land. However, this is a bad time of year for this to happen as it is not only mountaineering expeditions that are desperate to get to the hills but also hundreds of trekkers, who want to make their ways to base camp and other beautiful places in the Khumbu. Most of the passengers normally arrive at Kathmandu airport at around 6 in the morning and if there is a problem with the flights they often have to wait there until the early afternoon. And if you have ever been to Kathmandu airport, you will know that this is not the most exciting airport to be stuck at! However, as most airlines are desperate to ferry passengers and cargo into the hills, they often hope for the cloud cover to lift later in the day. This, however, hardly ever happens and there are very few planes that are actually able to get to Lukla in the afternoon. Once the clouds have moved in, they remain there for the rest of the day.

I am due to fly out this Wednesday but it could easily happen that I will be in Kathmandu for another few days if the weather does not improve. However, sitting here in Kathmandu in beautiful sunshine makes it hard to believe that the weather in the hills does not permit planes to land.

Well, let’s hope that the situation will improve as it will be very difficult to clear the backlog if this bad weather continues for the next few days.