Smog in Kathmandu, and what I do for Miss Hawley 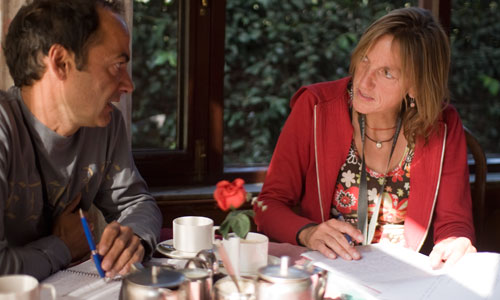 Kathmandu has been under a thick cloud, or rather smog cover for the last few days. It still has not rained even though the skies look so gloomy that you would expect the first drops to fall soon. But nothing has happened so far and according to the weather forecast there is no rain in sight! Most people in Kathmandu are currently suffering from a very dry cough (the author of this blog included) and according to Kathmandu’s Bir Hospital, an increasing number of people have respiratory problems. The water shortage is getting worse, the reservoirs are running dry, hydro power stations cannot cope with the few hours of electricity they can give us and the air in the capital is dry and dusty.

It all sounds pretty daunting but we are all getting on with our lives. For me, however, the dry air makes training in the outdoors more of a challenge, as I have to run through the dusty and polluted roads of Kathmandu to get to the rice fields, which, thankfully, are still green and lush. On Saturday, I went for a 25km run across the hills with two friends of mine and even though the running was hard it was refreshing to get out of the smog of the city. We ran towards Shivapuri, which, at an altitude of 2,563m, is the second highest hill in the Kathmandu valley. I know, it sounds insignificant compared with all the other Himalayan giants of Nepal but it is a fantastic spot to get out and enjoy some greenery.

Regarding my Everest expedition….apart from training hard, I have just spent one hour filling in Miss Hawley’s bio forms for the 28 members of our expedition. You might now wonder what that is all about, which gives me the chance to explain quickly what I actually do for the Himalayan Database.

Miss Hawley has been archiving mountaineering expeditions since 1963, when the first American Everest team descended on Nepal and successfully climbed the Hornbein Couloir. She covered the expedition as an American journalist but was so fascinated by it that she kept on interviewing teams about their climbs until the present day. What started out to be a hobby has turned into an amazing collection of data of all expeditions in the Nepal Himalayas.

At the beginning of each climbing season in either spring or autumn, I hit the phone and ring about 50 trekking agencies (Miss Hawley and my colleague Jeevan do the same) to find out whether they run any expeditions to so-called “expedition peaks “ (This is a classification by the Nepali government and we “only” archive those kind of peaks, which there are 237 of!) If they do, I get the details about the teams’ arrival, their hotels and departure dates, and then it is up to me to find them.

Expedition leaders have been amazed by the fact that they get a phone call from Miss Hawley the minute they enter their rooms, however, what they don’t know is the fact that Miss Hawley would have probably already rung about 10 times before their arrival. As I race around Kathmandu on my bicycle anyway, I normally go straight to the hotels and find the expeditions there. Sometimes, however, I am unlucky and the receptionist tells me that they have just left the hotel. The problem is that once the climbers have checked in and gone out, they hardly spend any time in the hotel. So, I have actually been seen stopping people in the streets of Kathmandu, asking whether they are, let’s say, two Italian climbers. It is actually quite amazing how good I have become at “mountaineer spotting” after all those years.

Most people are surprised how quickly we find them and wonder how we know that they were actually coming but that is thanks to the great cooperation of the trekking agencies that support us in our work. Once I have located the mountaineers, I fix a date for a brief meeting with them. In the initial interview I get the personal details about the climbers, and I fill in a form (all done by hand and NOT by computer) where I make notes about their climbing plans. However, the most important information they give me is when they come back to Kathmandu and when they are returning to their countries. In this way, I know exactly when I have to start looking for them to get the expedition details. The problem is that during the Everest season, most expeditions come back within a few days and the amount of running around Miss Hawley, Jeevan and I do is amazing, however, we hardly ever miss a team!

Anyway, I’d better run and find the next expedition!